“Almost from the first her novels stood apart from the usual offerings among historical fiction.” – Jennifer Kloester

I liked Simon the Coldheart well enough, but find myself with not much to say about it. Reading it between Wolf Hall and Bring Up the Bodies* was, in retrospect, not the greatest idea. I was too eager to get back to Mantel to give Simon the attention he deserved; and he does deserve it. To be honest, I had a hard time putting it down for first half of the book. The second half didn’t exactly drag, but it lost a little momentum–and that was just when we were getting to the love story.

Jennifer Kloester writes that Heyer was still experimenting with settings, moving from the contemporary setting of Instead of the Thorn and the short stories she was churning out to move back into history, this time during the reigns of Henry IV and V.

Lacking formal training in history and research, she had begun to develop her own methods of rummaging in the past for material. For Simon she read mostly for ephemeral detail, making notes on language and vocabulary, customs, castles, costume, battlecraft, weaponry and etiquette. (p. 76)

Simon is the illegitimate son of the Earl of Malvallet, and when his mother dies, takes the name Beauvallet (GET IT? MALVALLET? BEAUVALLET? GET IT?) and presents himself to Malvallet’s enemy, Fulk, Earl of Montlice, seeking employment. Fulk is amused by the boy’s brash confidence, and takes him on as a page. Simon learns and rises to esquire, becoming friends with Fulk’s son Alan as well. Alan is a romantic, and as the boys grow into men, he learns the gentle art of chivalry, flirting and wooing and making ballads for lovely young women. Simon, however, doesn’t get it. Women don’t interest him. Fulk predicts that one day a woman will come along and capture his heart.

During a battle, he becomes acquainted with Geoffrey Malvallet, his half-brother–the legitimate heir. They respect each other as fine soldiers, and become great friends. Simon is knighted, and earns an estate, and over the years gains a reputation as tough and omniscient and without any messy and inconvenient feelings. He is a little too perfect to be completely satisfactory, but the Gary Stu-ness is fortunately relieved by a slow-kindled sense of humor and a softness for children.

In the train of Henry V, Simon, with his besties Alan and Geoffrey, conquer their way across France, until they come to the stubborn town of Belrémy, where the legendary Lady Margaret rules with an iron hand. The lady refuses to capitulate to King Hal, but Simon (of course) launches a perfect assault that wins the town. Lady Margaret is now his captive, and she is not at all happy about it. In his turn, he is fascinated with her, but doesn’t completely understand why, until the time when she, dressed as a boy, takes a dead man’s sword and fights at his side. Yes, I see the no doubt completely unintended homoerotic undertones, too. But Margaret is a great heroine and very much a lady.

Not to give too many spoilers, as by now my Gentle Readers probably get the idea. I found the book enjoyable and very readable. It’s way better than The Great Roxhythe, as historical fiction goes, more lighthearted and fun, with moments of romance and humor between some of the minor characters that lighten the battle scenes. It’s not a typical romance by any stretch–the heroine doesn’t show up until halfway through the book. Heyer uses a more formal pseudo-medieval style, not as heavy or as pretentious as in Roxhythe, but it’s there. It probably wouldn’t have bothered me as much if I hadn’t read it more or less concurrently with Hilary Mantel’s books, in which the author experiments more successfully with language and style. Even while I admire Heyer’s dedication to the historical record, I found the style difficult to fully embrace, probably because I’m not used to it. I have no problem at all with Regency cant, and find it fun and amusing, so perhaps it’s just a case of unfamiliarity.

The historical novel has an appeal to two classes of readers: those who like a stirring tale of adventure. heightened by an infusion of “atmosphere,” and those who are interested by a reconstruction of past times. Occasionally, but not very often, both are catered for by the same book. Of Miss Georgette Heyer’s Simon the Coldheart (Heinemann, 7s.6d.net), one can only say that it is above the average of the former class of romance, and that it does make an attempt, not completely successful, to enter the latter. – The Times Literary Supplement, 19 November 1925 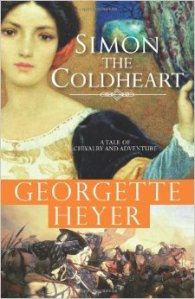 Heyer later suppressed the novel, though her husband (or perhaps her son?) had it republished after her death, so it’s unlikely she hated it. It doesn’t fit that well with her more well-known work. I found myself wondering what those people thought of it who bought the Dutton edition in 1979, excited by the information on the dust jacket that this was a Georgette Heyer that had not been published for decades. It probably wasn’t at all what they were expecting, but there is certainly enough that is familiar. Simon the Coldheart is another stop on Heyer’s authorial journey, and we’re getting closer to what Jane Aiken Hodge called her “golden vein.”

Onward and upward to the next book in the All of Heyer Project, These Old Shades. I’m looking forward to becoming reacquainted with the Duke of Avon and a certain red-headed, blue-eyed spitfire.

Also, a gratuitous image of Tom Hiddleston as Henry V, because this is my blog and I can. OHAI HAL

*Of which I will have more to say anon.