Sourcebooks is in the process of rebranding its editions of Georgette Heyer’s novels. I want to say up front that Sourcebooks performs a real public service in keeping Heyer in print here in the U.S. It wasn’t that long ago that, if we Yanks wished to read Heyer’s books and our public library was not well-stocked, we had to comb used-book stores and websites, sometimes paying outrageous prices due to their rarity–Heyer fans tend to hang on to their copies–or import them from the UK at considerable expense. I know that because I did it.

Sourcebooks recently posted on their “Georgette Heyer” Facebook page the first redesigned cover they are launching, for The Grand Sophy, which can be seen at left (you can see it at a larger size by clicking on it). While the illustration is fresh and appealing, it has about as much to do with The Grand Sophy as I do with nuclear geophysics.

One is tempted to respond, in the language of Austen and Heyer, that some great misapprehension has occurred. Is that supposed to be Sophy Stanton-Lacy? Whose clothes are all from Paris, who drives a high-perch phaeton and rides a spirited Mameluke-trained stallion, and who carries a pistol and knows how to use it (though it throws a little right)? This simpering miss with her ribbons and flounces and sweet cotton gown that she ran up from the Simplicity Basic Regency Gown pattern using quilting fabric from JoAnn? With a really weird handbag? And evening gloves with a day dress and bonnet? THAT’S supposed to be The Grand Sophy?

And what’s with the rose-festooned, white-brick country house? The whole book takes place in London, except for a couple of scenes at Sancia’s house in Merton and  Lacy Manor in Ashstead, both relatively close to the city.

At least they got the dog right. Tina the Italian Greyhound is perfectly rendered, though she should be clinging to her mistress’ skirts. Clearly Tina knows something is screwy.

Georgette Heyer is a treasure and we want to introduce her to a new generation of readers. To that end, beginning this summer we’re releasing new editions of the romances with fresh, new covers, designed to grow a new readership. 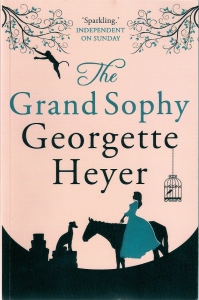 They also posted to a non-public Facebook page for Heyer fans and asked for feedback. The feedback was, unsurprisingly, critical. Several commenters assumed that by “a new generation” Sourcebooks referred to Young Persons. Perhaps they did, but I feel like this cover is not necessarily directed to younger readers. As one of the commenters pointed out, would a generation raised on Katniss Everdeen, sparkly vampires, and John Green’s doomed characters be attracted to this? If they are shooting for that audience, the latest covers on the Arrow edition from the UK (at right) seem to us tailor-made. They are simply smashing, with a modern aesthetic that is yet respectful of the content.

I suspect that Sourcebooks is looking somewhere else for its intended audience: readers of “sweet” or (shudder) “clean” romance novels. I hate the word “clean” to describe books…it implies that other kinds of books are “dirty.” But it is all part of the genreization, to coin a word, of publishing and bookselling today. Every book must have its slot, and clearly the comedies of manners of Georgette Heyer, mistress of wit and style, fit into the “clean romance” category as far as publishing is concerned. To me, they are simply in the category of “books that are awesome.”

The title of Sourcebooks’ edition of TGS at Amazon includes the words “clean romance” as a keyword. So they are clearly going for the crowd that prefers its romance novels without sex scenes. Nothing wrong with that–I have no real objection to sex scenes myself, although I find the very graphic, multi-page descriptions of the act found in most genre romances these days tedious and silly. I realize I am singular in that view. The vast majority of romance readers expect such content, so those books without it must be ghettoized into their own category.

It should perhaps be pointed out that many dedicated fans of romance novels dislike Jane Austen’s (unless wet shirts are involved) and Georgette Heyer’s novels. It seems to me that if a publisher is looking for a new audience, it probably would be better to maybe create a new category. But I suppose that is difficult in the current state of publishing. Fans of both Austen and Heyer seem content to re-read their favorites and not seek out new books which often are just pale imitations. It’s safe, that’s for sure, and certainly I’m as guilty of it as anyone. After all, Austen and Heyer stand up to many re-readings. But that’s not good for a publisher’s bottom line.

Despite having written a book on the subject of covers of Jane Austen novels, frankly I find the whole voodoo art of book covers mystifying with regard to 21st-century publishing. I mean, I know what I like, and I like something pretty and/or interesting that relates well to the story within. Like Austen, Heyer’s book covers over time have reflected contemporary design, and some, just by being dated and inappropriate, are snarkable. But one would think that any 21st-century design would be informed and thoughtful as well as beautiful.

The first Heyer covers, with the wonderful illustrations by Philip Gough and Arthur Barbosa, are classic and collectible. We would wish that it were possible to bring them back. I dare say it would be possible to license the artwork, but they probably do not fit into the current accepted thinking on book covers.

Obviously the book cover is an important consideration in bookselling, and while I really don’t like this one, I am willing to allow that the folks at Sourcebooks know more than I do about the subject as it relates to publishing a book in 2016.

The Grand Sophy with the new cover will be released on an unsuspecting world in August, so it’s too late to save Miss Stanton-Lacy from the Pit of Twee. But if given the opportunity, how would I improve this cover?

Well, first dump the sweet. The story may be “sweet,” but Sophy Stanton-Lacy is not. She is relentlessly fashionable. If you don’t want to use period illustrations, how about a fashion plate? We have one in particular in mind.

We borrowed this image with permission from the Jane Austen’s World blog, and agree with Vic that Heyer very likely had this fashion plate in mind when she described Sophy’s riding habit that so shocked Miss Wraxton.

This garment, when she appeared in it on the following afternoon, filled Cecilia with envy but slightly staggered her brother, who could not feel that a habit made of pale blue cloth, with epaulettes and frogs, a la Hussar, and sleeves braided halfway up the arm, would win approval from Miss Wraxton. Blue kid gloves and half-boots, a high-standing collar trimmed with lace, a muslin cravat, narrow lace ruffles at the wrists, and a tall-crowned hat, like a shako, with a peak over the eyes, and a plume of curled ostrich feathers completed this dashing toilette.

There are images of Heyer’s famous notebooks (seriously, somebody publish those, please, Jennifer Kloester we’re looking at you) in which Heyer has clearly traced and colored in period fashion plates. It is very likely that she used them in her descriptions of various gowns in the books. This makes them entirely appropriate to use for cover illustrations of Heyer’s books.

By all means modernize the look of the fashion plate–give it to an artist and have her recreate Sophy in this charming habit, with the height and generous bustline that Heyer gave her, not to mention the intelligence and charm that define Sophy as a character, and make the background Georgian London, and include Sophy’s horse Salamanca, and of course don’t forget Tina. And maybe the monkey. And then someday when someone writes Georgette Heyer Cover to Cover, the snark won’t wax quite as long.

Here’s a gallery of cover images for The Grand Sophy. Few of them are really any good!

The new Sourcebooks cover, to be released in August 2016.

The current cover for Arrow’s UK edition of TGS. Sophy’s hair and dress aren’t really right, but there’s Salamanca, Tina, Jacko the monkey and the foul-mouthed parrot. See how easy it is?

The cover of the first edition, with a painting by Philip Gough. 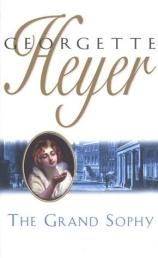 An older Arrow edition (I own this one, purchased new in the 1990s).

A Harlequin edition from 2003. 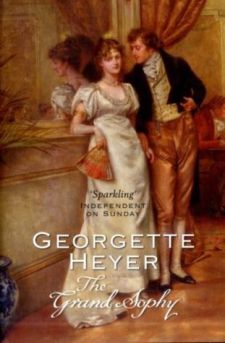 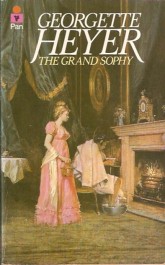 A Pan edition from sometime in the 1960s or 70s. This appears to be an illustration of the scene where Sophy nurses her young cousin.

Another rather bodice-rippery cover from Pan. From what I could find online, this illustration was reused for many Pan editions, and at one point was redone somewhat with a new gown for Sophy and a slightly less snobby Charles Rivenhall.

Now this is what I call the GRAND Sophy! Check out those furs…I believe she has sables in the book, though. 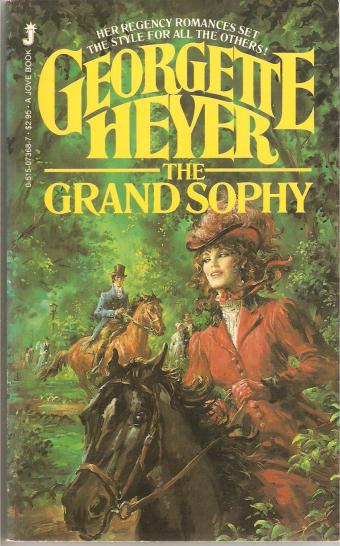 This one’s from Jove, and at least we have Equestrienne Sophy, though it’s still not really right.

Another Jove, another equestrienne, but this looks rather more correct.

Addendum the first: Speaking of The Grand Sophy, there’s some exciting news about a film production of the novel! Some really scary details came out of the Sony hack about a planned film version in which Sophy Stanton-Lacy is a British spy. Really, Sony? Really, Robin Swicord, who did such a good job with The Jane Austen Book Club and was so nice when I fangirled all over her at the Vancouver AGM?

But thankfully that idea has been abandoned. According to the Jane to Georgette blog:

Someone commented on a GoodReads thread about The Grand Sophy that she had heard from Jen Koestler and, through a fans group, from Olivia Hetreed, that apparently: “The bodice ripping Jane Bond idea was discarded years ago. Hetreed writes that she is a lifelong fan of GH & will hopefully produce something true to the spirit of this book.”

This sounds MUCH better. The Jane Austen Film Club blog wrote to Heyer biographer Jennifer Koestler, who got some information from the Heyer estate:

“They’ve got a great young actress called Jessie Buckley for Sophy, and Rob Ashford as director, and they’re working on yet another draft of the script, but no production date has been set. The producers are talking about trying to attract A-listers for subsidiary roles, but no names have been mentioned.”

So, it’s not a definite thing yet, but it’s being worked on. I’ll certainly pass on more details if I hear of them. The novel as-is would make a terrific movie, I think.

Addendum the second: I have not forgotten my All of Heyer project, and in fact was working on my post about These Old Shades when this kerfuffle surfaced. Be patient; that post has to be a good one. 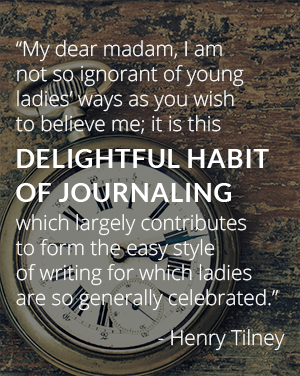