“It is probably the worst book Georgette Heyer ever wrote.” – Jane Aiken Hodge

Have you ever read a book and it was kind of awful, but you kept reading it because it had to get better?  And then it never does? 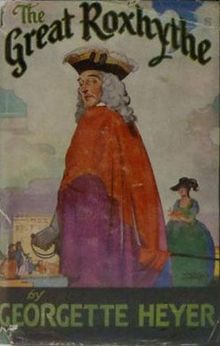 Cover of the first edition

It pains me to say that about The Great Roxhythe. It pains me to say that about any of Georgette Heyer’s novels. She is a favorite, as the Marquis of Roxhythe himself was a favorite of Charles II, and one does not like to think ill of one’s favorite; but I suppose that every author–even a favorite–is entitled to a dud. And even while I didn’t care much for Roxhythe, it is not a dud, not completely. And even bad Heyer is better than a lot of other books.

“The Great Roxhythe, The Transformation of Philip Jettan (later retitled Powder and Patch) and Simon the Coldheart were all published by 1925. They are all interesting as early experiments in the historical mode, and it is also illuminating that she later suppressed The Great Roxhythe and Simon the Coldheart. They were experiments in a direction that was not to prove propitious for her.” – Jane Aiken Hodge

The novel is set in the years between 1668 and 1685, during the reign of Charles II. There is a power struggle between England, France, and the Netherlands, each constantly at war among themselves or close to it, it seems to me (who is no student of the period) more to keep the others at bay than to gain anything by it. There is always intrigue at the highest levels. Charles needs money, and Parliament will not give it to him, so he attempts to get it from his fellow kingly leaders, Louis XIV or the rising William of Orange. When Louis proves recalcitrant, Charles sends his favorite Roxhythe to Holland to make an offer to William. His uncle, Charles, will endeavor to put him in power and take his side against Louis, if William will promise to give his uncle a small allowance once he is in power. William, who is portrayed as intelligent and upright and a bit Puritanical, refuses this offer. Roxhythe is then dispatched to Louis, who, having established that Charles will sell himself, then only has to quibble over the price.

The costumes shown here are all wrong for this novel, which is set in the time of Charles II.

Roxhythe employs a young secretary, Christopher Dart, whose brother is in the service of William and could help Roxhythe gain access to His Highness. Young Chris is a patriot and an idealist. He admires Roxhythe tremendously, and Roxhythe in his turn likes Chris and keeps him on when the episode with William is past. Chris is repeatedly warned by various people, including Roxhythe himself, to not place his trust in Roxhythe, whose entire life is dedicated to Charles, but Chris refuses to believe that his lord would be involved in political intrigues. He asked Roxhythe, and Roxhythe denied it! His lord would not lie to him! He was a great man! As he himself would say, “I am Roxhythe.” Chris loves his lord, and will believe no ill of him.

Now we come to a major issue with this novel. Heyer biographer Jennifer Kloester puts it gently. After Heyer suppressed the novel, “It is possible that one of the reasons for Georgette’s growing dislike of the novel arose from the shift in public awareness of homosexual love which had evolved by the Second World War.” (p. 59) Knowing that Heyer’s father no doubt exposed his intelligent daughter to elements of a classical education that likely included reading Plato and the concept of erotic vs. platonic love, one feels a bit dirty-minded to read about Chris’ love for his master–love that does not die even after his eyes are opened to Roxhythe’s true nature–and think that he sounds like a really tiresome lovelorn teenage girl, but, well, he does!

“He–doesn’t count, you know. I–never cared for him greatly, and since I have been with–Roxhythe–he has had all my love. He has it still. There will never be another in his place. I’m a weak fool–but–oh, Lady Frances, I want him so much!”

Oh for the love of baby Elvis.

That afternoon Christopher surveyed his many suits deliberately. If he was to wait on Lady Fanny he must be carefully dressed. At the back of the cupboard hung a brown velvet suit, heavily laced with gold. Christopher fingered it dreamily. He had worn this coat last when he had returned from Flanders . . . Then there was the blue cloth with its cream facings. That had been bought for a garden-party at Lady Pommeroy’s house. Roxhythe had worn apricot velvet . . . He put it back slowly. The lilac velvet? No . . . That had been his summer suit down at Bevan last year . . . The grey cloth with the pale blue ribands? . . . Not that. Roxhythe had approved of that dress. What was it he had said? . . . Almost roughly Christopher thrust it back into the cupboard. From its depths he drew a green coat laced with silver. He had seldom worn this, thinking it ugly, Well it should be worn now. He shut the cupboard.

The ellipses, for the reader’s information, are in the original. Chris is meant to be the Incorruptible, but he’s really just kind of tiresome.

You may be wondering about the plot, and I’m afraid there isn’t much of one. Roxhythe engages in various intrigues over the remaining years of Charles’ reign. I am not at all a student of this period and often had recourse to Wikipedia to get a quick overview of the various wars and plots. Heyer does a very good job of putting Roxhythe at all the important events and plots against Charles. He works for Charles mostly in secret; most people underestimate him, thinking him a stupid, silly court-card, but like the Scarlet Pimpernel, Roxhythe has abilities that he does not let show publicly. He acts as envoy for the king to both Louis and William, and becomes involved in the plots around the succession. Charles has no legitimate heirs; his brother James is openly Roman Catholic, and there is a large contingent who would prefer a Protestant king in England and have no problem using violence to get their way. The plots revolve around assassinating James and Charles and placing the Duke of Monmouth, Charles’ illegitimate son, or William of Orange, who is married to James’ daughter Mary, on the throne. Roxhythe insinuates himself into these plots and destroys them all. He’s a bit of a Gary Stu, to be honest–he’s way too perfect, and always succeeds. “I am Roxhythe,” he says, either to explain why his plan will no doubt succeed, or why the person who is defying him needs to step off. He is Roxhythe. He speaks about himself in the third person. He is fascinating, but at the same time it’s all a bit much. However, one also sees hints of other Heyer heroes in him. His languid manner, his all-knowing demeanor, his ability to read people and act when the time is right: say hello to the precursor to Justin Alastair, Duke of Avon, and several Regency gentlemen as well. In those descriptions, and even in some of the dialogue, and frankly in the refusal to buckle under to modern literary convention and stubbornly cling to what was proper from history and too bad if the reader is too stupid or ignorant or immature to deal with it, it is all recognizably Heyer.

That being said, Heyer herself said, “this very jejeune work, written when I was nineteen (and just the kind of book you’d expect from an overambitious teenager!) was withdrawn, at my own urgent request, from circulation years ago.” (Kloester, p. 59) That’s a good description. It has accomplishment, but not great interest for the reader; though perhaps we’ve been spoiled by Hilary Mantel and other modern writers of fictionalized history. That’s what Heyer was trying to do, and while she didn’t succeed, she certainly learned from the book and used those lessons as she moved on in her career.

As noted above and in my post on the copyright situation of Heyer’s novels, Heyer suppressed The Great Roxhythe, apparently because it did not meet her exacting requirements for work bearing her name. The novel remained out of print until the international copyright expired in 1970, and several publishers have reprinted it since then. I obtained a copy published in 1978 from my local library system, so if you’re curious, it’s out there.

Next up: Powder and Patch, originally published as The Transformation of Philip Jettan. I’m listening to the audiobook of this one, as I have another book to read for my book group and research for a fiction project, and hopefully it will encourage me to get on the treadmill to listen to it! It’s the Georgette Heyer Workout! Gentle Readers perusing a list of Heyer’s books by year of publication may think I’m skipping ahead a bit, but I will explain all when I blog about it.

4 thoughts on “All of Heyer: The Great Roxhythe”